Published 2018:  IN LIVING MEMORY:  The Benches of Waterlow Park

Thirty-six stories about the people remembered through their benches in the park have been researched by local writer, Towyn Mason.

‘Waterlow Park, a garden for the gardenless’
by Pam Cooper 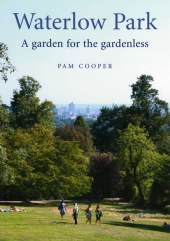 The land, the  people, their houses and gardens, especially the Lauderdale House terraced garden,
from earliest times; from 1889, the public park, its historic trees, the park restoration of 2005

Pam Cooper is by profession a technical translator of European languages. She is a graduate in the Conservation of Historic Landscapes, Parks and Gardens (Architectural Association), 1992. From 1999 to 2002 she chaired the Friends of Waterlow Park and the Waterlow Park Action Group, which was formed in response to proposals to restore the park.

See also: Things to Do >